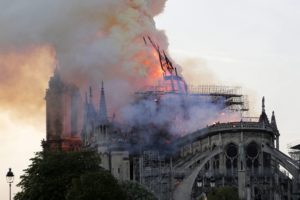 The Notre-Dame de Paris fire on April 15th reminded us of our deep attachment to the heritage of our country. It also showed us how much it constituted the French identity and exception in the eyes of the world. Behind the scenes, the debates revealed our culture of risk, our blind spots and our conception of responsibility.
First of all, a little naiveté, since it is obvious that Notre-Dame was not insured for the extent and damage of such a fire. Because such a risk could not be managed by any institution. Another debate, and the inquiry may say so later, but there is little doubt that one person, one behaviour, is the cause of the fire. Without stigmatizing anyone, someone is responsible for this fire. But this very fact is difficult to affirm in a general context where our relationship to risk is far from peaceful. As a testimony, the President’s unreasonable promise to the cameras: Notre-Dame will be repaired and rebuilt in 5 years. This promise is a political response of conquest, we understand that. It is also a form of feverishness in the face of risk and its consequences.
These debates on Notre Dame are critical because they reveal the state of economic opinion on risk. Companies still have an irrational relationship to risk. We are in the midst of a paradox: an increasingly risky world – starting with the exponential growth of cybercrime – and an increasingly low tolerance for risk. We must change our culture of responsibility and reason to make risk a lever for growth rather than a subject of tension and concealment.
In concrete terms? A two-step instruction for companies. Analyze the reality of their own risks first, not those of their peers or those who are deciphered in the newspapers. Too many companies have not yet realized their own risk analysis, based on the challenges of their business. The lack of knowledge of the risk is often based on the lack of control over one’s own activity and scenarios of crisis. Second step, which directly involves the executive and his or her committee to direction: define your own risk appetite. How far is he or she willing to go and what benefit is expected? What emotional relationship is put to risk? The objective is accepting more risks while controlling them better. It is not the responsibility of the insurance sector, nor to the State as a last resort, to eliminate all hazards and risks in the business environment. We can’t keep ourselves safe from risk. We need to get to know it and tame it.
This mission is first and foremost the responsibility of the manager. Risk is neither a technical subject nor a regulatory subject that could be delegated and circumscribed to the Director’s office of risks. This is an eminently strategic subject. For every risk corresponds to a term. Risk hedging only makes sense in relation to a given maturity date. There is no total or eternal coverage of the risk. These arbitrations are strategic for the company’s trajectory and survival. Risk is another name for ambition.
How to ensure that companies raise the threshold of ambition and look to the long term? This structuring question for the state of capitalism could find an answer through the actual reintegration of risk into governance. One could imagine making risk an objective element of the compensation of managers, and not a sanction in the event of an actual risk. This would have the advantage of encouraging the director to speak out loud and clear, in any
transparency, the risk it is willing to take for the company and for what purpose.
If his remuneration depends on it, shareholders would be asked to position themselves
in relation to this strategy. The risk strategy would become a defined variable by the Compensation Committee and would be the subject of a resolution at the General Assembly. It is time to define an indicator of efficient and ambitious risk-taking, exactly as we have learned to define and generalize indicators of performance. This risk strategy would then become a strong component of differentiation and attractiveness for companies. The risks that the company would be willing to take and their objectives would be known to shareholders, but also to suppliers, customers and especially employees.
Our relationship to risk is a highly personal, strategic and political subject. It is urgent that the leaders objectify it and remove its affect. If the risk remains tacit, a febrile solitary exercise, we will have all the trouble in the world to find growth in a world characterized by the intensity of risks that surround us. Upstream work to succeed in this cultural change consists of urgently rethinking our education system by promoting more reason and more analysis.

About the Author: Ellisalliance Team

This site uses Akismet to reduce spam. Learn how your comment data is processed.